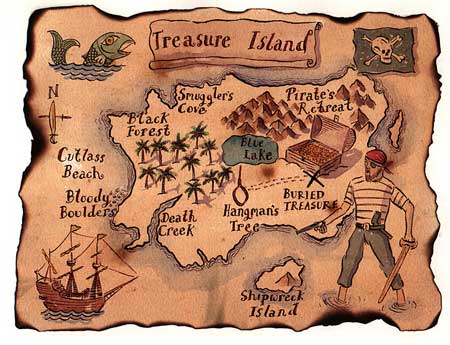 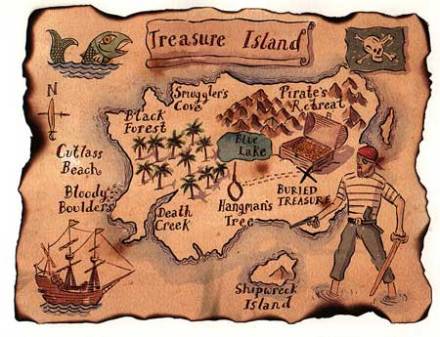 How I avoided not reading Treasure Island as a kid goes back to a loner childhood void of popular classic literature yet abundant in a few other sources of… entertainment: Little Golden Books, illustrated abecedarian student encyclopedias from which I wrote most every fourth-grade book report, abridged story book versions of various fairy tales and classics, and steady bolus doses of cartoons.

I wouldn’t say consuming all those forms of art caused my early aversion to reading but they certainly helped, as did the Santa Fe Public School system. Growing up in that system, the paltry required reading lists provided little stimulation. Yes, I did read Shakespeare, Fitzgerald, Anaya, Salinger, and García Márquez. I even skimmed some Lee and Cervantes. Looked at Poe. Considered Tolkien. But I was never a reader. I never hunted books down. I never got to Twain or Dickinson or Golding or Lewis or Stevenson when I was young and should have. My head, unfortunately, was already filled up with halfway versions of those timeless stories, etched either by Disney feature films, Hanna-Barbera serials, or eight-minute Looney Tune vignettes. I admit: I was a pop-culture crack baby.

I blame myself though, really, for my dearth of classic reading—boys’ classic reading—that is. Can’t blame the family or the schools. The books were always there if I had only found them. I guess it would have helped too, however, if I had stepped away from the screen from time to time and put my imagination to better use.

On the subject of screens, the one I look at most often now, aside from the computer, is the mobile phone, and the mobile phone that currently owns me—a Samsung Galaxy­—came pre-loaded with three classics: Wuthering Heights, The Three Musketeers, and, none other than, Treasure Island.

Finding this free little e-library in my phone was indeed like unearthing a treasure. Among the treasure was this particular volume that had been on my endless list of catch up books that would allow me to, as Vonnegut once said in an interview in response to his own lack of well-readedness, enter classic literature through the back door. In other words, get to the party late and still be able to get intoxicated but with a much better grasp of one’s self and the alcohol, in this case, the literature.

Finding Stevenson right there on my phone meant I wouldn’t need to go buy a copy of Treasure Island nor check it out from the library which is how I get my reading fix now.  And I do read. I’ve arrived at the party, through the back door, and I’m one of the guests that won’t leave. With Treasure Island on my phone, I would go ahead and read my first e-book. And since Musketeers and Wuthering Heights were on there, too, I might as well just go ahead and read those.

I discovered Treasure around May and finished reading it in September. Yes, it’s pathetic. You may now please chide me the way you chided me for not reading more of the classics in the first place, but I have a defense, and this is it: I just couldn’t get into the book. Not the story. The story was great. It was the book, held in my hand, the page stark white with about 60 words per tiny page that felt wrong.

I rushed through chapters. Scrolled ahead to see how many of the small pages I had left. At the end of a chapter, I toggled over to the contents page to see where exactly in the file I was. I toggled. That word right there shouldn’t be something you do with a book. Toggling.

A slow reader I am. I nibble books. And I admit: I skim through things I’m not interested in. Like the way you might be skimming over this right now. But if I like a book, I take my time. If I love a book, I stop and savor. I count words and letters and study the punctuation. I read and reread.  So maybe I didn’t love Treasure Island as much as a twelve year old might have, but I wonder if I would have liked it more had I read the printed book.

I’m also a promiscuous reader. I’ve got a non-fiction book going here, a story collection there, a novel over there, and magazines everywhere else. In the four month stretch it took me to read Treasure Island, I read a literary magazine, a couple issues of Harper’s, Alice’s Adventures in Wonderland (for the third or fourth time), got through most of Andy Borowitz’s 50 Funniest American Writers* collection, Pam Houston’s knockout Contents May Have Shifted and Jess Walter’s The Financial Lives of the Poets. I got to Treasure Island when I wasn’t doing something else. When I was waiting for something, or in a line, or killing time and looking at my phone, waiting for something to happen, like most people do.

The point is, I didn’t make reading Treasure Island a priority because I didn’t like that I had to go into the phone—a device I’m really not too crazy about to begin with—to enjoy it. It became an, “Oh yeah, that’s there and I need to take care of that,” type-thing. It became like checking e-mail or looking at Twitter. Perfunctory. Mindless.

I’m a bad reader in general. This again goes back to the childhood void of proper books at my disposal (and my lack of desire to find said books). I simply wasn’t passionate about reading. Even the lure of a personal pan pizza didn’t get me going, despite my going through a round of Book It! in fifth grade, circa 1987. For the program, I read some entirely lame thin books well below my reading level. It was totally not worth it to be sitting there at the Pizza Hut on St. Francis Drive which is now long gone, redeeming my coupon for a small pizza, just enough for me. I couldn’t even feed my mother. It wasn’t like when Karen Russell grew up as cited in her article in the Science Fiction issue of The New Yorker. Her generation was eligible for an entire pizza in the early 1990’s. We had it hard back in the late 1980’s. And much harder in Santa Fe where there were no books at all.

Had I grown up in Portland, would I now have a full-fledged love of reading? Perhaps a militant obsession? Maybe. I do believe the environment does have a say. And though growing up in Santa Fe where there were no books and reading was against the law, I was nurtured. Just a little. Mrs. Capshaw, my ninth grade Freshman English teacher, secretly put literature in front of me. Shakespeare, Orwell, Fitzgerald. She said I should read Wilder’s prehistoric allegorical play, The Skin of Our Teeth which I did, and loved. She said I should write more after I turned in a short story about drug dealing cats.

In college I read as required, but the “for fun” reading didn’t start until long after college when a writer some of you might know, last name rhymes with Bing, wrote about the only way one gets better at writing is through reading. Well, shit. I guess I have to do more of that.

And so I have. I read now for fun, and yes, because I really enjoy it. I love most the immersion into literature, how it’s kind of painful at first, then once you put yourself all the way in, it starts to hurt so good. Now I have a modest library filled with Vonnegut and Twain and Saunders and Fitzgerald and Diaz and García Márquez and Salinger and Almond and Shepard and Houston and Walters and many others, all of whose pages are dog eared and tabbed and written in. I’m a book worm now, inching my way through, savoring the pages—printed pages—I love.

But I worry about readers like me. Readers that skim over anything digital. Readers that claim to know the news when really all they’ve done is read a couple of headlines on Yahoo. Readers that find headlines or tweets—140 characters or less—to be all you need; and yet sometimes that’s too much. I would think bad readers turn into worse readers, and I would think that readers that prefer to read only printed material for enjoyment may eventually turn away from reading for enjoyment all together. As books migrate to digital formats—and they eventually all will—I can’t help but imagine the act of reading itself, soon to be exclusively eye-to-screen, becoming mind-numbing and bothersome, like most television, e-mail, and all the other crap we have to do in front of a computer screen that involves words.

I won’t end this on doom or gloom or leave you with the notion that this op-ed is only about my fears of the printed book going away, though that is what this is about. Mostly. What the rest of this statement is also about is the writing and how ultimately, it will matter most in the future.  Writers will have to compete with the mouse. Literary magazines tell submitters to send in work for readers that have one finger hovering, ready to right-click. If the writing is good, readers will not shut it down. The same is/was true for printed books. If it was that good, you kept the book open. You kept on reading.

I suppose that’s why I kept on with Treasure Island. Those last few chapters, when Jim Hawkins turned the corner, seized control of the Hispaniola, wagered with Long John Silver, and at last became a man, the story started to feel right, and no, it didn’t really matter that I was reading it on my phone. The story still excited me and I pushed through. I arrived  at the end, one less book on my list to read, one less book on my shelf.